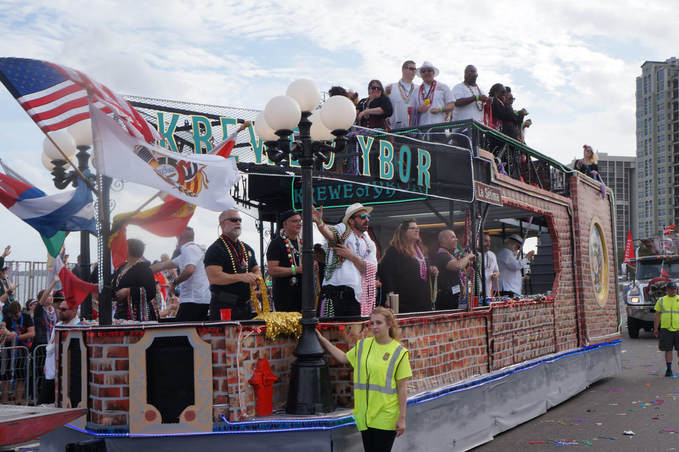 Ybor City, with its history as a melting pot of cultural diversity, adds flavor to Tampa's tourist mix of attractions, aquarium, museums, cruise port, entertainment and general quality of life that differentiates it from other major Florida tourist destinations. Tampa's Latin Quarter serves as a
dining, shopping, art, entertainment and cultural experience for those who visit.

In 1885, Don Vicente Martinez Ybor obtained 40 acres of land which soon became a city for thousands of immigrants. Several things influenced his selection of this site northeast of the existing city of Tampa--among them; a growing transportation hub which included a new railroad and shipping port, and the warn climate.

The Ybor Cigar Factory, which opened in 1886, was the largest in the world. Two additional factories opened the following year and various ethnic groups began bringing their families, belongings, traditions, religions, languages, and foods to this close-knit settlement. The industry created a diverse Latin community that continues today.

Thousands of immigrants came to this "new world" to find their destiny. Seventh Avenue, or as it was more commonly called, "La Sétima," was the heart of the community. Shop owners lived above their stores, relaxed on balconies and socialized in clubs. A typical summer day might consist of families or couples strolling along La Sétima, visiting the many shops, bakeries and cantinas. Attending the weekly "tea" dances in one of the cultural clubs . . . or, watching an intense game of dominos.

Ybor City became the support center for the Cuban Revolution when, in 1898, the army stationed thousands of men here including Teddy Roosevelt and his "Rough Riders." Cuban revolutionary, José Martí, made many visits to Ybor City during this era.

Although the industry that made this unique community world famous declined following the Depression and mechanization, the spark that glowed so brightly failed to die. After an attempt at urban renewal, property values decreased even further. Many held on . . . many did not. Newcomers established businesses which continued the diversity and enhanced the culture.

In 1990, Ybor City was designated as a National Historic Landmark District, only one of three in the state. The red brick streets, distinctive street lamps, and wrought-iron balconies continue to prevail and complement the ambience. Hand-rolled cigars, Cuban sandwiches, café con leche, and bocce tournaments can still be easily found.

This is the Official Ybor City Seal
designed by the late
Historian Tony Pizzo in 1952.

The four flags, American, Spanish, Cuban and Italian represent the first settlers.  The sidewheeler, "The Hutchinson", brought the first Cuban Cigarmakers in 1886.  Shown at the bottom of the seal are the tobacco leaves and a twig of the Guava tree which played a part in the creation of the cigar center.  In the center is the official flag of Ybor City shown as the centershield of the Ybor seal.  The Cigar in the center of the flag memorializes the industry which launched Tampa into a viable industrial center - and also honors the Jose Marti Cigar which concealed the "message to Gomez" which led to the Revolution of 1895, and freedom to Cuba. - TONY PIZZO